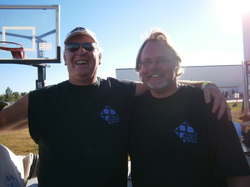 September 2 - Athletes from all over the world are pouring in the hotels in Calgary. Tomorrow the Masters World Championships will start at 8.30 sharp. Tonight I met most of the atlhletes Al Stagner (defending champion), Bob Vail, Terry Hunt, Ted Leger and Uli Mueller and his wife Petra. Tomorrow wil have an early start about 5.30,

september 3 - Al Stagner for the third time World Champion in the class 50-54! Congrats Big Al. Bob Vail was second and in third place was Ted Leger. Godfried Kleinmeijer took 6th place in a very stiff competion. A detailed report will follow.
Uli Mueller (Germany) world-class athlete competing in the 40 - 44 class could not make it in the top three this time (as he did in Scotland). A pity for the gentle giant from Germany. The former olympic hammer thrower cleaned he bar easily over 15 feet in the warming up, then a few minutes later he missed the 15 feet in competiton. Also worth mentioning the new world record with the light hammer from Neil McKenzie (Scotland). Next year competition will be in South Carolina (US). And then in 2014 (hopefully) it will be back in Inverness (Scotland).

September 18 - Wybe Zeilstra wins for the second year in a row the Dutch Masters Championships. He owns his win to a very consistent level of competittion throughout the year. Wulbert Stam, who is in the rankings above Wybe, was a firm second. Nevertheless he missed too many competitons to win the title due to an injury. Harry Bergsma was in third place and Godfried Kleinmeijer fourth, he didn't compete in the Dutch final and therefore lost his third place. Wybe congrats with your win, you did an outstanding job and your determination has brought you the title again. You deserved it! Hans Lolkema was taking firm hold of most of the Dutch Masters records.