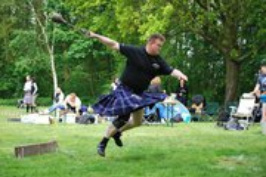 Wybe Zeilstra throwing the WFD
Wybe Zeilstra,  the Dutch master champion from 2010 and 2011, owns a glass company. Wybe  is a very hard-working athlete and his WFD is one of his strongest assets (78.7 feet LWFD).  His hammerthrow is also good. He's from Oosterwolde (Friesland), and competed in the European Masters Championships and the Masters World championships..
Zeilstra is also an accomplished tower with heavy objects (boat towing). He was was born in 1968 and is married (his wife supports him everywhere) and has children. He's very goal-oriented and improves every year.The multiple master champion is  1.86 and his weight is around 122 kilograms. Wybe has won the Dutch Masters title three times.