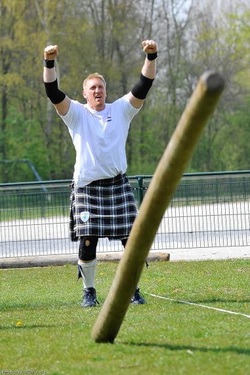 Wulbert Stam is throwing a 12 a clock!
Wulbert Stam, born in 1971, is one of the most experienced master athletes He works as an project manager for a big company in Amsterdam,  an innovative housing association that develops, builds and manages homes and other property in the Amsterdam Metropolitan Area (AMA).  He's a very big athlete, around 135 kilogram. Stam, a former Dutch basketball star, has international experience (he competed  in Belgium, Scotland and Iceland). He's not only a Highland Games athlete himself but also a promoter for Highlander Challenges and/or games and the sport in general.

If he's not competing, he's a referee. Also Wulbert is doing all the statistics and rankings for the Dutch/Belgian athletes and of course the official website from the Dutch Highland Games Federation . He's a living proof that despite being a master he keeps improving his personal records. Actually he's ranked as professional (A status). He's a very good hammer thrower and his WFH is well enough to keep up with the best. You can check him out on his website Dutch Highlander.

Wulbert Stam is the the former Masters Champion of the Netherlands. He won the title in 2012 and 2013.

Status: retired (is active as referee for Highland Games)