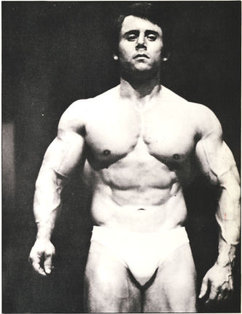 Guiseppe Deiana, World Champion
My gym for  most of the time was and still is Deiana Sports. They have everything I need, olympic barbells. heavy dumbells, power rack, enough weightplates to satisfy most power athletes. My longtime friend and gym owner Guiseppe Deiana was in his prime time one of the best athletes in the world. Up to 5th place in the Mr. Olympia contest in South Africa (which was won by Arnold as we all know).
The picture shows Guiseppe in the late seventies during the Mr. Olympia in 1975.

I tried to talk him in the Mr.Olympia for masters but he was not wild about this idea, so it never happened. It's a pity because he always stayed in great shape.

Frans Padberg in Australia
Frans talked me in the gym because I knew him from boxing and he wanted me to put on some weight on my skinny frame. Also Ab Goossen (power lifter), who equalled the European bench press record in the middle eighties and of course Martin Regtop, multiple Dutch masters record holder in the discus throw..
In the eighties I did some strength demonstrations with Klaus Kaak ('biggest arms in the World'). Nowadays I know my strength will not be the same as it was for 20 or 25 years, but I'll give my best shot. ..